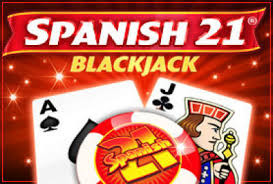 This is one of the more popular variants of blackjack.  The reason why is because it’s still possible to gain the edge over the house when you play, if played properly. 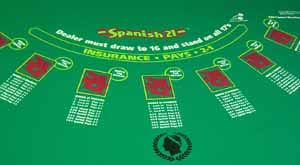 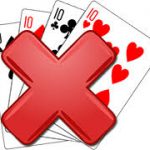 Remember, 10’s are considered player friendly in regular blackjack.  Without 10’s in the deck, the house edge raises by almost 2 percent.

To compensate for the absence of 10’s, the rules for Spanish 21 are much more liberal than the regular game of blackjack.

For example, if you get 21, (hitting to 21 as opposed to being dealt a blackjack) you always win even if the dealer has 21. Within a traditional blackjack game, if you hit to 21, you would “push” if the dealer ends up with 21 as well. Winning hands of 5,6 or 7 cards will pay a bonus.  You’re allowed to surrender at anytime, even after hitting, doubling or pair splitting.

The table below summarizes the typical Spanish 21 playing rules compared to the traditional game of blackjack.

(Note: There may be some slight differences in rules from one casino to another.)

EFFECT OF THE MISSING TENS

You can probably understand the thrill in Spanish 21 because of all the different rules and bonus hands that are offered. However, beware, missing those 4 10’s does make a big difference in how the game works out. If you were to play with the same strategies of traditional blackjack, you’d lose your money before your seat was warm! 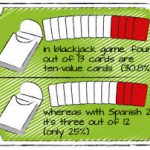 The key point is that these major differences in rules should have a great effect on the playing strategy, meaning it is a bit more complicated.  You know the house doesn’t want to make things too easy for you!

Here’s a solid example: If you have a stiff 12 – 16 in traditional blackjack and the dealer shows a 2–6, you would stand (except you would hit 12 against dealer’s 2 and 3). With Spanish 21, hitting becomes more inviting because you have less chance of busting because of fewer 10-value cards. Plus, if you hit to 21, you automatically win.

Yes the strategy is more complicated, but it can be mastered with study and practice. There are several sources available for accurate Spanish 21 strategy.  Here’s a couple to checkout: The Big Book of Blackjack by Arnold Snyder and The Pro’s Guide to Spanish 21 and Australian Pontoon by Katrina Walker.

For a 6-deck, S17 game, the house edge (as a percentage of initial wager) using the Spanish 21 basic playing strategy (U.S. standard rules) is only 0.37 percent (from Katrina Walker’s book).  For a 6-deck, H17 game, the house edge becomes .78 percent. As you can see, the game with S17 is much more player friendly than one with H17; however, to achieve these low house edges, you must learn the Spanish 21 basic playing strategy.

With redoubling allowed, the house edge decreases slightly (For example, from 0.78% in H17, six-deck game to 0.42%). Yes it’s great that the house edge goes down, but also remember that having to learn the correct strategy for this redouble option makes the basic playing strategy for Spanish 21 even more difficult.us

Because Spanish 21 offers the player plenty  of options, it provides a sense of excitement not found in traditional blackjack.  Therefore, more and more players are flocking to Spanish 21 for the thrill of a new challenge. Almost all casinos are offering it now, with tables full of players looking for a more exciting game of blackjack.